The Pensions Regulator is proposing clarity on its powers to impose financial penalties on trustees. The outcome may mean an increase in fines.

The Pensions Regulator (tPR) has launched a consultation on a draft monetary penalties policy as part of its commitment to take tougher enforcement action against trustees who fail to meet the required scheme governance standards.  If adopted, penalties imposed on trustees (and, in particular, corporate and professional trustees) could be significantly higher than, perhaps, previously seen.  This is a potentially significant development given the general prohibition on the use of scheme assets to indemnify trustees in respect of civil penalties.

Introduction
A trustee's lot is not (always) a happy one.  Often unpaid and subject to onerous duties, anyone who is a trustee of a pension scheme will be well aware that tPR also has the power to impose financial penalties in certain circumstances.  The same trustees will also, no doubt, be keeping a watching brief on the developing concept of '21st century trusteeship' and governance set out in tPR's discussion paper of July 2016 where the stated aim is to improve board effectiveness on a variety of levels.  This improvement will be achieved by both the carrot and the stick.  The stick, in this case, is tPR's intention to make greater use of its powers, including the power to impose monetary penalties, where there have been scheme governance and administration failings. In support of its intention, tPR has issued a consultation document setting out its draft monetary penalties policy which aims to clarify the way in which penalties are applied.

A summary of the rules on trustee penalties
Legislation (principally the Pensions Act 1995 and the Occupational Pension Schemes (Charges and Governance) Regulations 2015) provides that tPR can (and in some cases must) impose penalties of up to £5,000 on an individual and up to £50,000 on a corporate trustee for breach of certain statutory requirements.  Until recently there were few reported cases of tPR exercising its power to impose penalties on trustees.  However, the introduction of mandatory penalties in 2015 for breach of the chair's statement requirement, a commitment by tPR to take "tougher enforcement against trustees who fail to meet the required standards"*  and now the publication of the draft monetary penalties policy indicate a sea change in tPR's approach to compliance.

The proposal from tPR is to introduce three bands of penalties depending on the severity of the breach.  The size of the penalty will also be dependent on the person involved. 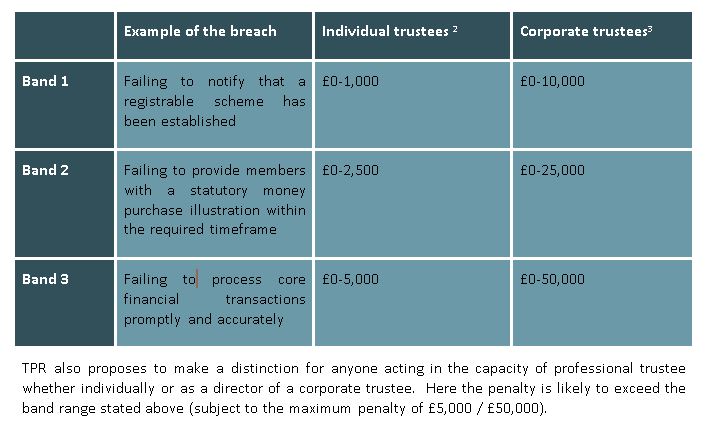 TPR's proposed approach to determining the amount of any penalty is to start in the middle of the relevant band range.  It would then take account of any relevant factors to increase or decrease the amount.  Unsurprisingly therefore, trustees who notify issues in advance, who report breaches quickly and who co-operate and seek to resolve breaches swiftly and efficiently are more likely to receive a lower penalty than those who do not.  And, again unsurprisingly, deliberately concealing a breach (which was never a good idea) will be dealt with more severely.

The consultation does not cover all areas where tPR has the power to impose penalties (for example it does not cover non-compliance of the employer duties under automatic enrolment legislation) but it does provide a framework for trustees to work within.

What next?
The consultation finishes on 9 May 2017 and we will watch with interest how this unfolds.  The likely outcome is much more visibility from tPR on the issue of penalties.

For further comment on this consultation or any aspect of trusteeship please contact your usual Wrigleys adviser.

The information in this article is necessarily of a general nature. Specific advice should be sought for specific situations. If you have any queries or need any legal advice please feel free to contact Wrigleys Solicitors