News Will the 2014 changes to intestacy rules affect you?

Will the 2014 changes to intestacy rules affect you?

The intestacy rules apply to estates of people who have died without a Will. We summarise the main changes in the law in force from 1 October 2014.

What are the intestacy rules?

To put it simply, for people who die without a Will, the intestacy rules will determine who receives a share of the deceased's estate (that is money, property, possessions).

The rules are complicated and the changes are intended to simplify them but do so in quite a technical way.

This rule made the administration of the estate complicated and could lead to disputes between the widow or widower and other family members.

The Inheritance and Trustees' Powers Act 2014

The new rules, which came into force on 1 October 2014, give the surviving spouse an absolute interest in either:

Whilst this will make the administration of the estate much simpler, it does mean that a person's entire estate could pass to their widow or widower and then on to the widow's or widower's family, rather than to the first deceased's own blood relatives.

As you will see from the table below, the children of the deceased rank highest followed by parents. However, the intestacy rules can be problematic in some cases as they do not provide for several groups of people who are often provided for in a Will. For example, unmarried partners, stepchildren and friends.

The changes do not affect the position of couples who are unmarried or not in a civil a partnership.  As before, assets would still pass to next of kin, rather than to a surviving partner.

If you would wish your estate to be divided up in a different way then you can ensure this by making a Will.

Why are the rules changing?

The rules can be complicated and it has also been recognised that they can have unforeseen effects for modern families. Particularly families with children, unmarried people and co-habiting couples.

The Law Commission consulted on the issue and it was hoped that the reform to inheritance law would simplify the intestacy rules and make them more relevant for the 21st century.

Have the rule changes helped?

There has been some disappointment that the rule changes have not gone far enough, though the changes have simplified elements of the law.

The group of people who stand to gain most from the changes are spouses and civil partners. However, the changes could disadvantage other family members, including even children. People in marriages or civil partnerships should be aware that the order of inheritance may not necessarily represent their wishes if they were to die first.

There is likely to be disappointment amongst advocates of greater rights for 'common law' partners who still remain at risk of not receiving anything from their deceased partner if that partner dies without a Will. As things stand, a surviving partner in an unmarried relationship may not receive anything if there is no Will. This is the case regardless of how many years they have been together, and even though they may have children together.

"The Law Commission's initial proposals were far more wide ranging and we had expected the intestacy rules to be thoroughly modernised to cater for the fact that more people co-habit.  These new rules do nothing to grant inheritance rights to co-habiting couples and indeed give more, and possibly unexpected, rights to the surviving spouse.  As such it is more important than ever to consider making a Will, especially for anyone who is co-habiting with a partner.”

The rule changes do not affect people who die with less than £250,000 worth of assets. 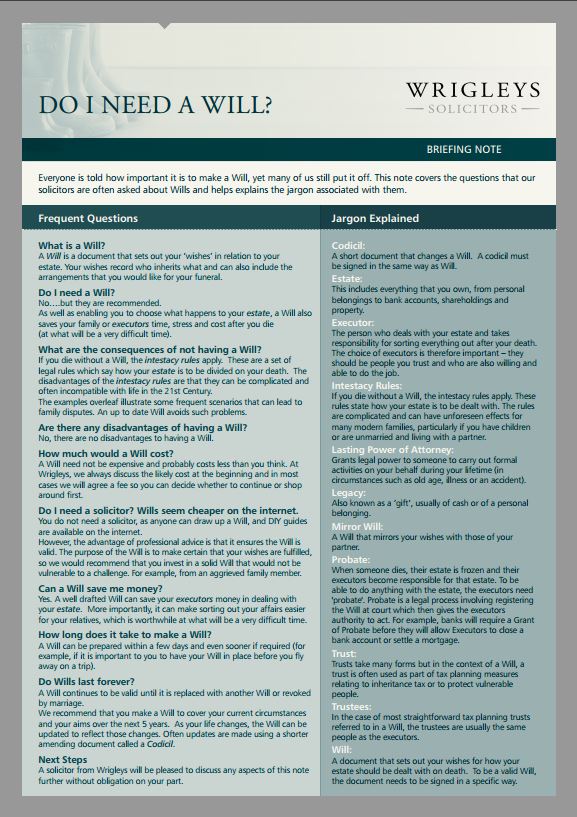 Briefing Note - Do I need a Will?
News
Events
Publications

The myth of the “Common Law marriage”

When will the disposal of shares by trustees qualify for Entrepreneurs’ Relief?

Venue: This webinar will take place via zoom. Joining instructions to follow from our events team one day before the event.

Venue: This social will take place via zoom. Joining instructions will follow from our events team one day before the event.