Can Independent User Trusts save National Insurance costs for employers of care staff?

Wrigleys consider what impact the NIC Employment Allowance has for deputies and families who employ carers. 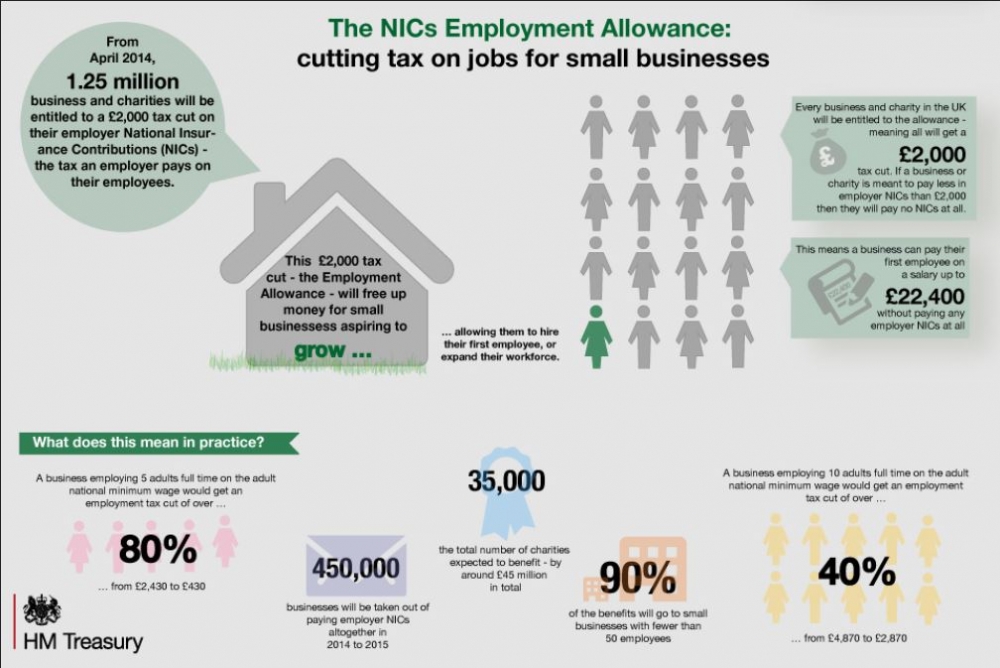 In the interests of stimulating the economy, in the 2013 budget the Chancellor introduced the idea of reducing the cost of employing staff for businesses and charities, albeit with some specific exceptions.  This idea became the National Insurance Contributions Employment Allowance, which came into effect on 1 April 2014.

The Allowance gives certain employers the ability to reduce their Class 1 National Insurance Contribution (“NIC”) costs by up to £2,000 per year.  The process of claiming is intended to be simple and straightforward, using existing PAYE systems.

HM Treasury calculations suggest that the Allowance would mean a business can employ its first member of staff and pay them up to £22,400 per year without incurring any Class 1 NIC, as seen in the above diagram.

When required, the cost of employing carers domestically can often account for a significant amount of household expenditure.  A saving of £2,000 per year would clearly be welcome.

At first glance, it is therefore disappointing to see that employers of care support workers are excluded from claiming the Allowance.

This would appear to rule out most domestic care situations where a carer is directly employed (e.g. as opposed to through an agency).  However, it is worth looking at the legislation on which this guidance is based:

Legislation - Relevance to Clients and their families

The Act responsible for the Allowance is the National Insurance Contributions Act 2014.

Certain people are excluded from being able to claim the Allowance.  These appear under the heading of “Exceptions”.  The relevant exception here is explained at s2(3) as:

Liabilities to pay secondary Class 1 contributions incurred by a person (“P”) are “excluded liabilities” if they are incurred in respect of an employed earner who is employed (wholly or partly) for purposes connected with P's personal, family or household affairs.”

"P" being the client receiving care.

On our interpretation, this section would indicate that an individual employing a carer or carers for their own needs would be excluded from claiming the £2,000 Allowance.

The impact of this will be disappointing for many advisers dealing with care arrangements.

Relevance to Court of Protection Deputies

It appears to us that a deputy directly employing care staff cannot make use of the Allowance either.

Deputies are commonly referred to as “standing in the shoes of P” – the incapacitated person they act for.

“Section 19(6) [Mental Capacity Act 2005] states that a deputy is to be treated as ‘the agent’ of the person who lacks capacity when they act on their behalf. Being an agent means that the deputy has legal duties (under the law of agency) to the person they are representing. It also means that when they carry out tasks within their powers, they are not personally liable to third parties.”

It may be said then that where a deputy employs a carer(s) then, by the law of agency, they are employed by P insofar as ensuring the s2(3) exclusion applies.

Conversely, IUTs (sometimes referred to as User Independent Trusts), would appear to be able to make use of the Allowance.

As discussed in our previous article here, an IUT can be used to employ caring staff even where a deputy is appointed, if that deputy cannot, or is unwilling to employ directly themselves.

Where an IUT is used, the trustees of that IUT employ the care support workers as opposed to them being employed by either the client or their deputy.  As such, the liability for Class 1 NIC contributions is incurred by the IUT trustees and not by P.

The exclusion detailed in s2(3) therefore falls at the first hurdle because P does not incur the liability.

It appears therefore, that an IUT has a financial advantage as far as Class 1 NICs are concerned, in that the £2,000 allowance may be claimed for the employment of carers. If this is the case, it would be an advantage to using an IUT to employ carers rather than the deputy, client or family employing the carers themselves.

A note of caution

Firstly, IUTs should only be used following the receipt of appropriate advice.  IUTs are required for a variety of reasons and ought not be established solely for the purpose of claiming this Allowance.

Secondly, of course, legislation can be amended or repealed.  Whilst the Allowance is a positive step for many business and for clients who receive their care package under an IUT, it is not guaranteed to last or remain in its current form.

Wrigleys have a large professional deputyship and trustee practice. Our team are experienced in drafting IUTs and in the legal and practical issues involved in running them which is done through our Community Care department.