News Is your charity ready for the general election on 8 June?

Is your charity ready for the general election on 8 June?

A quick recap of the key rules relating to political activity by charities, in the run up to the 2017 election.

As many are all too keenly aware, the outcome of a general election can have a significant impact on the charity sector.  Are funding streams which you currently rely on likely to be available under the next government?  How will changes in government policy affect delivery of your charitable objects?  What will happen to demand for your services?  Will new laws add to the regulatory burden?  What will the election results mean for Brexit and what will Brexit mean for the charity sector?

If you have not already done so, it may be helpful to consider how the different possible general election results may affect your charity, and what steps you might take to manage risks and capitalise on opportunities.  This might be part of a wider risk assessment process or SWOT analysis.

Does your charity engage with politics as a means of advancing its objects?  This can be a legitimate activity, and election time can provide a good opportunity to make your charity's voice heard, but you will need to take care not to fall foul of charity law, election law, or any other law in any of the jurisdictions in which you operate.  It is worth noting that Scotland and Northern Ireland have different laws from England and Wales.

Particular charity law points to bear in mind are the need at all times to:

If your charity campaigns or engages in political activity (or you are thinking about doing so), you should read the Charity Commission's guidance on "Campaigning and political activity for charities" (CC9), which includes a helpful checklist for trustees

Particular restrictions apply to charities which receive local authority funding, as local authorities and organisations which they fund must not give publicity to any political party or publish any material that appears to be designed to influence public support for or against a political party.  Breach of local government regulations may jeopardise funding.

Do you need to register with the Electoral Commission?

A new law was introduced in 2014 which means that some charities may now need to register with the Electoral Commission as "non-party campaigners".  This involves looking at your charity's planned activities, the timing of those activities and how much you plan to spend on those activities.  In 2015, the Electoral Commission produced a summary flowchart to assist charities in deciding whether they need to register as non-party campaigners. This flowchart is updated for the 2017 election below: 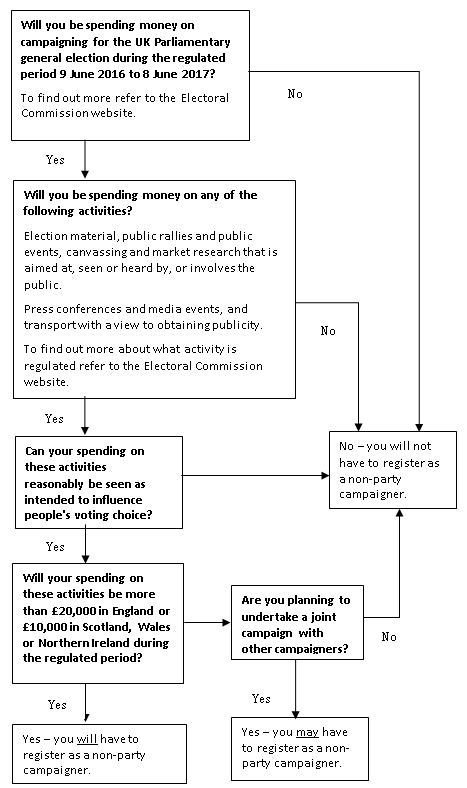 Regardless of whether you are registered with the Electoral Commission, the maximum amount you can spend on regulated campaign activity in any one parliamentary constituency is £9,750.  Registered non-party campaigners also need to comply with rules on campaign spending, donations and reporting.

There is more information available from the Electoral Commission's website

What about any funds you spent on campaigning before the election was called?

The Electoral Commission has issued guidance on this (there is a link to their guidance below).  All funds spent on "regulated activity" between 9 June 2016 and 8 June 2017 count.  You will need to look back to calculate relevant spending over the past year to assess whether you need to register.  The Electoral Commission advises that you also consider whether past expenditure when taken together with planned future expenditure will take you over the registration threshold.

If you realise that you are over the registration threshold (e.g. because you spent over the threshold before the election was called) and take prompt steps to register, the Electoral Commission has indicated that it is unlikely to take enforcement action.

Spending to support "remain" or "leave" in the EU referendum (rather than promoting a party or category of candidates in an election) does not count towards regulated spending as a non-party campaigner.

In April 2017, Greenpeace became the first organisation to be fined under these rules because of its refusal to register as a non-party campaigner in the run up to the 2015 election and was made to pay £30,000. 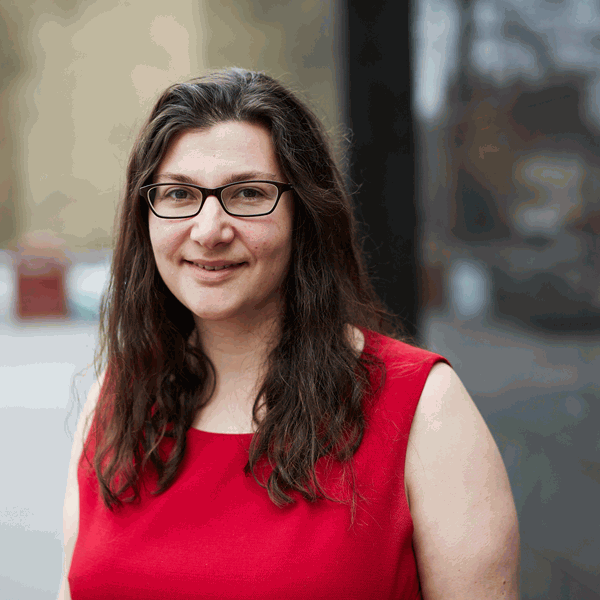 Flowchart - Is your charity ready for the General Election?
News
Events
Publications

The new Job Support Scheme: what is it and will it be enough?

Employers must fund at least 55% of normal wages if claiming under the new scheme.

This is an attempt to make it easier for people to record their final wishes whilst continuing to protect the elderly and the vulnerable.

The first Child Trust Funds have started to pay out this month.