This sad case involved CJF, a 13 year old boy who had suffered extensive injuries through negligence at his birth and who needed significant 24 hour care for all aspects of his life. He sadly died a few days after the case was decided.

CJF’s mother was 18 when he was born and her health was affected by the birth too. His father denied that he was the father and had nothing to do with CJF. Mother looked after CJF for the first part of his life but he then went to live with foster carers under a Special Guardianship Order.

The original foster carer died just before the claim was settled and her daughter and the daughter’s husband took over care and guardianship. A property was purchased and adapted using funds from the litigation and CJF had lived there with the foster carers and their two daughters ever since.

The Court used the principles which would apply if this had been an application for a statutory will. The only issue the parties had not been able to agree on was whether the gift should be free of or subject to Inheritance Tax.  That was made difficult by the imminent death of CJF and the Judge was clear that this was not a criticism of CJF’s mother at such a difficult time.

Although the foster carers were willing to pay the Inheritance Tax by instalments, it was clear it would be a struggle for them. Their own economic position had been much affected by their decision to take over the care.

There was also a concern that if the rest of CJF’s property was not put in to a settlement then half of that would go to his father who had denied that he was CJF’s father and had no involvement with him at all.

The Judge took the view that matters should not be delayed in order to serve the biological father, both because of the urgency and because he had denied paternity and not been involved in CJF’s life. He did order that he be located and served after the hearing and that he had 21 days from service to apply to Court for the Order to be set aside or varied.

‎The Judge said that CJF had not expressed wishes and feelings about his estate and was unaware that he had one. The reasoning applied was:

“CJF had expressed no wishes and feelings as to what should happen to his estate after he died. The evidence of those who cared for him and the medical evidence suggests that CJF was unaware that he had an estate that could be passed on. He was aware that he was being looked after by people who loved and cared for him and is likely to have been aware that the home he was living in had been adapted to improve his quality of life.

The beliefs and values that I find would have been likely to have influenced his decision are a wish to provide for those who loved and cared for him and that includes KF as well as EH and AH. He would also have wanted EH’s and AH’s daughters to be looked after.

Other factors that he would be likely to consider if he were able to do so would be the effect that caring for CJF had on EH’s and AH’s financial situation. EH was unable to work due to her caring responsibilities and AH took a lower paid job in order to be able to make more time for CJF as well as the rest of his family. I am told by LCN, and I accept, that EH and AH refused care payments they would have been entitled to from CJF’s estate, benefiting his estate to the sum of around £240,000. I find that CJF would have wanted EH’s and AH’s daughters to have been able to remain in their home and to be able to continue attending their local school.

Another factor that I find CJF would have been likely to consider is the fact that KF, as a young single mother, looked after him in the early stages of his life and that she has suffered long-term medical consequences as a result of the complications at his birth.

I find that CJF is likely to have considered that his biological father, BJF, who played no part in his life should not stand to gain from CJF’s estate”.

The Judge considered that the ‎magnetic factor here was that CJF would have wanted the foster carers and their family to be able to stay in the home securely.

The foster parents received the property and funds to pay Inheritance Tax and the rest of the estate passed to CJF’s mother.

This is a very sad case handled with dignity by the parties and with a well thought out conclusion.

The notification of CJF’s biological father was ordered by the Court but after the Order was made. If he could be found he could become involved in proceedings. Normally a biological father would be served and if there had been more time that would have happened here. However, the Judge considered that the urgency and the father’s denial of paternity and non-involvement in CJF’s life combined to make an exceptional circumstance.

Where there is a real possibility that a person who lacks capacity will die before they reach 18, and where there are good reasons to think that the intestacy rules would not give a result that fits within the factors the Court will take into account, practitioners should consider ‎making an application. Between 1925 and 1959 there was no power to make statutory wills and the Court would approve settlements instead.  This case had particular circumstances which meant that the intestacy rules would give rise to injustice and a potentially contentious situation after death. I do not think this is a green light to statutory will applications ‘by the back door’ for children though.

EAT: threat was materially influenced by employee's refusal to work at site after rest break refused.

Exempt Charity Status – What does this mean for Schools and Academies?

We look here at what it means for a school or academy trust to be an exempt charity and how they can comply with their duties. 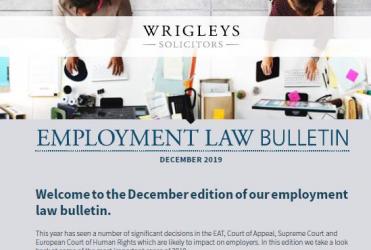