Blog > Guidance > What does the Court of Protection have to do with my vote?

What does the Court of Protection have to do with my vote?

As the holiday season dawns upon us, so does a newly elected government following the recent general election with a turnout of just under 32 million voters – approximately half the population of the UK!

Prior to the election, I had overheard a conversation between one of our paralegals and one of our clients, a protected party (“P”) for whom we act as deputy for property and financial affairs.

Throughout the conversation, P mentioned that they were excited to go out and vote, which led to me asking myself, rather cynically – if P lacks the mental capacity to manage their finances, and the Court of Protection recognises this and requires a deputy to make such decisions for them, how is the Court of Protection involved in their capacity to vote, making a decision that will likely impact the financial affairs of 66 million people, myself included?

Indeed, it turns out that the Mental Capacity Act 2005 does not apply to voting. A lack of capacity cannot stop someone from being able to vote – it is up to the person to decide if they wish to do so. Section 29 mentions that “Nothing in this Act permits a decision on voting at an election for any public office, or at a referendum, to be made on behalf of a person”, meaning that nobody can vote on a person’s behalf in their best interests.

Section 73 of the Electoral Administration Act 2006 states “Any rule of the common law which provides that a person is subject to a legal incapacity to vote by reason of his mental state is abolished.”

The Electoral Commission guidance states that “A lack of mental capacity is not a legal incapacity to vote”. However, a person cannot appoint a proxy voter if they lack the mental capacity to do so, meaning the decision of whether to vote, whom to vote for and the act of voting itself are completely down to P, and P only (although they may, of course, have arrangements in place to assist with any disabilities).

It appears I am not the first to ask myself this question though. Although I am barely scratching the surface, the UN Committee on the Rights of Persons with Disabilities (CRPD) have had their fair share of complaints regarding capacity and discrimination issues, and the notable case of Kiss v Hungary found a violation of the right to free elections as specified by the European Convention on Human Rights (ECHR). The subject of this case revolved around adults with learning disabilities being prevented from voting because they were subject to guardianship. The European Court ruled that such disqualification was unlawful, and Hungary then introduced individual assessments of voting capacity, but limited to people under guardianships only.

The central issue here is the concept itself of having to undertake a capacity assessment, to establish whether someone without capacity is able to cast a validly opinionated vote. How can even someone who does possess mental capacity be questioned as to whether their political opinion is valid? In the age of troll farms, “alternative facts” and disinformation, even the most confident, well-informed voter can be swayed with just one headline – but is a person without capacity more susceptible than the average voter? After all, bacon sandwiches, fields of wheat and model buses are universal.

Either way, the United Nations Committee found these assessments to be unlawful, if not discriminatory – if a person doesn’t have a mental disability, they would never be required to prove (if that would even be possible) that they do indeed have the capacity to vote.

The right to vote is obviously seen as fundamental. I will not claim credit for this, but in my research I came across a comment which questions the relativity of this fundamentality – although perhaps in a “whataboutist” way. The Court of Protection has previously gone as far as allowing people lacking the mental capacity to endure the stress of childbirth to be sterilised, therefore depriving them of the right to reproduce. Can we therefore assume that the right to vote is “more fundamental” than that?

As rhetorical as my internal questions may be, I am glad that as deputies we cannot, or don’t have to, make voting decisions for P. How would we even decide… on their past wishes and feelings, as we might with gifts for instance? The media has shown us many examples of the electorate who always voted in one way, but just this time they changed their minds. Ultimately, as deputies, the best we can do is to encourage P to exercise their rights – there’s probably a lot more at stake for them.

All in all, a thought provoking lunch break.

Question of the month: how should we adapt company policies in the face of coronavirus?

Employers need to consider how they will adapt to make sure policies and procedures are applied appropriately during the current circumstances. 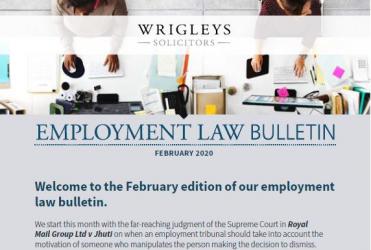